DEPRESSION AS THE ONLY ACUTE MANIFESTATION OF A THALAMIC STROKE: CASE REPORT

Post-stroke depression is the most common neuropsychiatric complication of stroke, and can occur early too late after stroke. However, having depression as an isolated clinical manifestation of stroke is extremely rare in the literature. We report the case of an ischemic vascular accident revealed by sudden onset depression in a 59-year-old female patient. On the basis of this report and a review of the literature we discuss the different hypotheses that may explain the underlying mechanisms.

The thalamus is one of the sub-cortical structures that have been of particular interest to researchers in recent decades. Since it projects over all areas, that thalamic activation was most often associated with neuropsychiatric manifestations under-recognized masquerading as non-stroke medical conditions.

We report a case of thalamic stroke in which isolated and abrupt onset depression is the only clinical symptom in the acute phase of stroke. Through this clinical case we discuss the anatomical and vascular characteristics of the thalamus as well as possible hypothesis that may explain the underlying mechanisms.

This is a 59-year-old patient taken to the emergency room for sudden change in behavior 1 day before the consultation. In the morning, when the patient is having breakfast with her daughter, she suddenly becomes silent, does not answer the questions asked by her daughter. His gestures become very slow. During the examination in the emergency room, the patient appears sad and does not react to verbal stimuli. Several attempts are necessary before answering the questions asked. His movements were very slow; listless, lack of energy, difficulty concentrating quickly distracted. These movements were slow with passive attitude. The patient move spontaneously all her limbs but she refuses to obey to our orders. She only repeats some words and she answers to some yes or no question by moving her head. No signs of anxiety or agitation were reported during the examination. Her Blood pressure was high; blood sugar was in the normal range.

The parents deny having any prior psychiatric history or symptoms. No traumatic event has been reported in last recent days. Her daughter reports that her mother wakes up very early in the morning with a marked lack of appetite. Due to the sudden onset of symptoms, a CT brain without injection was requested. We found a left thalamic hypo density suggesting sub-acute ischemic stroke (Figure 1). 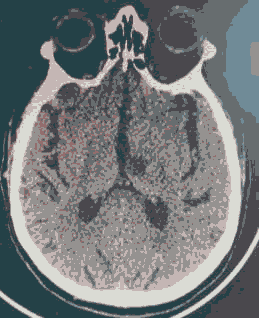 We continue the investigation with MRI BRAIN which confirms the diagnosis. A contrast MRI of brain was requested, due to atypical manifestations on the clinical chart, especially the age of presentation without a previous history of mental health problems. It showed an image suggestive of ischemic stroke in the left thalamus. (Figure 2 a-c).

Patient was admitted on neurology department for management of ischemic stroke, and then referred for psychiatric assessment. Her only medications at the time of consultation were aspirin, statin and anti-hypertension treatment.

Treatment with Citalopram 10 mg was initiated. Energy and mood improved slightly when the patient is seen on outpatient Department. Show ischemic stroke in the left thalamus

Thalamic stroke is a clinical chameleon with a wide range of symptoms far beyond the speech and senso-rimotor systems [1-3]. The neuropsychiatric manifestations presented in our case as sudden onset depression is an indicator of thalamic stroke and should be assessed accordingly.

Duret et al. were the first to study thalamic vascularization [4,5]. Percheron studied the reports which made it possible to simplify the anatomo-clinical considerations [4]. There are 4 large thalamic vascular territories, each with a predilection for supplying particular groups of nuclei. The variations in the vascular supply of the thalamus and the richness of the collateralisation, attributed to a very rich and very varied symptomatology; with aspecified difficulty the occluded artery [1].

Much information has now been published on consecu­tive series of patients and single cases with unilateral brain lesions causing a mood disorder [6]. It is now widely believed that the valence of lesion-induced mood disorder depends on the hemisphere lesioned [1]. Right lesions are more likely to produce mania and left lesions are more likely to cause depression. To our knowledge, there is only one study focusing on the distribution pattern and lateralization of thalamic stroke lesions [7].

In attempting to understand the effects of thalamic lesions on behavior, it is necessary to consider the roles of the fiber systems that link thalamic nuclei with other brain regions and of the fiber systems that pass through the thalamus because some of the observed clinical phenomena may result from lesions of these fiber pathways rather than from lesions of the nuclei themselves [5,8].

Two intrathalamic fiber systems are particularly relevant for learning and memory. The mamillothalamic tract (of Vicq d’Azyr) connects the anterior thalamic nuclear group with the mammillary body, which in turn is linked with hippocampus and entorhinal cortex. This tract, along with the fornix, binds the anterior thalamic nuclei into the neural system that sub serves learning and memory [8]. The ventral amygdalofugal pathway, in contrast, links the amygdala with the medial part of MD, and damage may therefore contribute to amnesia as well as to emotional dysregulation.

Clinically, the altered mental state was found in one large study as the most common chameleon, including manifestations such as psychosis, memory alterations, behavioral changes, mood alterations, and confusion. This type of presentation often guides the physician toward a non-neurological (psychiatric) cause for the clinical chart [9].

According to literature the post stroke depression in the acute phase was associated with thalamic lesions and severe stroke [10]. In our study, depression was the only clinical manifestation founded on neurological examination.

On our case sudden onset of symptom was clearly described by relatives that are why we have thinking about unusual clinical manifestation of stroke.

Acute and isolated neuropsychiatric manifestations as initial presentations of stroke have been poorly reported in the literature [11,12]. Thalamic infarcts presenting predominantly with psychiatric manifestations are rather uncommon. They usually have a constellation of neurological and psychiatric symptoms [13,14]. Several studies have shown that depression is the most common neuropsychiatric symptom encountered during the acute phase of ischemic stroke but in association with other neurological symptoms. Its prevalence is 9% to 37% followed by generalized anxiety disorder [10,12]. The specificity of our case is that the patient is presented with isolated depression.

In conclusion, it is fundamental to keep in mind that sudden onset neuropsychiatric pathologies such as depression should direct us towards non-psychiatric pathologies, even in the absence of concomitant neurological disorders. This diagnosis should be considered especially in patients without psychiatric or sub cortical history atrophy, with vascular risk factors.